skip to main | skip to sidebar

Being Irish, he had an abiding sense of tragedy, which sustained him through temporary periods of joy.
W. B. Yeats

Window words broke between us
and the shards were scattered,
splinters lodged
deep in the heart,

a rainbow arced across
the morning of no rain,
our eyes were prisms
splitting the light –

Something tracked the traces
we left, history’s letters
unwrote themselves
in the blood,

then there was the oath,
solemn as a caryatid, empty
as a cenotaph, whose words
love gave back to silence:

Remove a spear of glass and hope
bleeds out, now the pane
is polarized, and none can see
what the day has wrought.

Posted by Penal-Colony at 10:38 AM No comments:
Labels: Poem

Color settles as a fine dust on the air, clings
to films of webbing as sheer and fragile
as the flesh of a bubble’s membrane,
and then it bursts into flight, surfing
waves as nuanced as the circadian rhythms
and cycles of invisible time, as buoyant
and as lithe as the hymen-wings that lift it
into the light, coursing sunward with a flutter
and hitching itself to the thermal horripilations
of the day’s pulse and flow, those magnetic
heartbeats, whose ghostly tides wash
colors ashore, and delicately, gracefully lay
them down again on eiderdowns of pollen
and mist, till they rest softly with a sigh
of powder on the psychedelic palette
of each butter-flown, golden afternoon.

Posted by Penal-Colony at 8:21 PM No comments:
Labels: Poem


How did I ever get here? A red disc burns low

behind a minaret, the Adhan sounds for Fajr
and the air shimmers. Today it will blister.

I need to return to where I came from,
but cannot unpuzzle the Tangram shapes
from which my life has been assembled:

I stare till my eyes go numb, till the self is lost
to itself inside the repeating, cloning patterns,
and the muqarnas squinch their eyes shut.

That window is shaped like a teardrop,
its trellis fractures the light and shadows fall,
cooling the marble arches, floors and ceilings.

I trace a sinew of tile on a socle as if reading
the insular codex of Kells – in this cursive
I may yet find my golden homeward thread.

Posted by Penal-Colony at 3:29 AM No comments:
Labels: Poem


That year you went whale watching in the Arctic Ocean –

once out of Disko Bay, you saw a berg weeping itself

into the shape of a crouching angel, a frozen mist hung
above it like a Rorschach stain projecting a white absence.

Then the whale appeared, crashing through the ice,
its blowhole gasping as though a valve in the ocean

had burst and released its pent-up energies, it turned
and tensed, pulling and dragging as if to sculpt itself free

of the captive ice, as if by leaving its caves of gelid water
it would emerge to be born again and made whole.

Michelangelo created a series of sculptures he called, 'The Prisoners', or 'The Slaves', or 'Captives'. These pieces depict muscular figures in various aspects of struggle as they strain to pull themselves from the marble. They are fascinating metaphors for the creative act itself, and my own interpretation is to see in them the aesthetic predictive power of the imagination: the sculptor imagines his subjects already complete inside the block of marble, all he has to do is chip away the excess stone that holds them captive to reveal the perfect forms within. In a sense, though, the forms themselves take on a life of their own as they participate with the artist in the act of their creation -- the more that is revealed the mightier they struggle to pull themselves free, but that they remain unfinished is itself suggestive of the deeper philosophy, no work is ever fully finished, sometimes the work itself is the manacle, sometimes the mind gets in the way, and all art persists in that state of eternal becoming, an aesthetic ontology, if you will.

I borrow Michelangelo's metaphor in my poem, 'The Captive', to figure another kind of bondage, escape, becoming and release: in one instance an ice-berg melts into the shape of a kneeling, vanquished angel, while in another the great leviathan of the sea struggles to sculpt himself free of the bonds of ice that imprison him. We always hope that our creations will become whole, complete, that they will settle into their final, finished state, but we must admit perennial defeat and realize that all art is ever only a work in progress. We cannot achieve perfection even if we push ourselves like 'The Captives' to the very limits of struggle and endurance. That state of perfect freedom is as ineffable as it is beyond our reach. We are fated to be imprisoned by our own limitations, even if those strictures comprise the elements of our being. 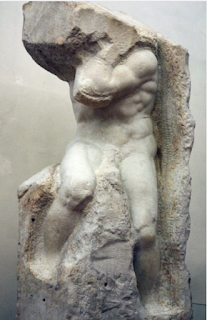 Posted by Penal-Colony at 5:05 AM No comments:
Labels: Poem


A shelf of rock that time left hanging

and tides without, the ebb and flow
of scraps and secrets, what lies buried deep
or washed ashore evokes the personality

of the sea, and the sea is me, as homesick
when at home as when pulled away
and lost in its own implacable currents.

Posted by Penal-Colony at 4:15 PM No comments:
Labels: Poem

The trees are all dead, they died before the rain
and winter, and no one stopped to witness the faces
in the windows, none saw the passing winds
like souls going, only memories lingered
like past sensations, the way music prompts recall –
our father standing in the last orchard
of the world and holding out the apple
even love could not eat. There was a scream
in the flight of wild geese that restored the year,
all around the gloom echoes died and the trees
interred them – veins and nerves collapsed,
bones crumbled to dust, sounds were silenced,
while the silhouettes of the cursive branches
scribbled their absence into the gloaming.

You left on a silver wave of light
that the dawn turned grey. Who knew your end
was as close as the start of the dying year –
we took our shifts by the bed and we waited,
bells and crows, engines and exhausts said life
would go on though yours was at an end,
even the post arrived with more bills for you –
time stands still for hope though faith strays
into hope – you know who have waited for love
as it was a guest that never arrived, a father
never returned from war, or a promise unfulfilled,
like snowfall at the close of the year, a year
that dies without you, and whose end is buried
in the sad silent heart of a mute betrayal.

The cries of a sparrow pierced the morning,
magpies circled, a fox peered from his lair,
and a hawk hovered above the trees –
we found her where she had flown for cover,
impaled through the heart, her wings broken
and entangled, her blood curdling the berries –
You said, life going is the same life everywhere
and what was lost we all will lose.
The week before you died a sparrow flew
into the kitchen, circled wildly, slammed
into the window and fell lifeless on the sill.
When mother went to scoop the body away,
the bird suddenly stirred, righted herself,
and flew out into the cool autumnal morning.

This is the psalter he carried on that fated voyage,
bitter brine from the Atlantic lashed the deck,
as he stood by the bow and prayed for land,
gazing out to sea and humming psalms into the night –
Off Nova Scotia the waves raged against his passage
and many died … what he took from the land
it never recovered, your name, our patronymic,
a generation destined to die far from the tribe,
buried instead at some wild frontier having caved
there to an alien sickness: story is, delirious,
he walked out onto the plains and never returned –
In those last days you caressed an old sepia photo
of him and bade us read from his psalter,
the only relics to survive that misadventure.

That last week you cried a lot and saw
your mother, long dead, at the foot of the bed.
‘Mammy is coming to take me home,’ you said –
Visions and ghosts hovered like memories,
the past returned and crowded the room, people,
voices, the old tongue, ballads, prayers, and delirium,
and soon we were all gathered by your bedside,
but then it was too late for talk and comforts.
Five Septembers have passed since that morning
and we are all scattered again … what happened
to your ghosts? We can still hear your voice in ours,
your high-pitched nasal screams, and your crooning –
This morning the Adhan called out of another time,
but it was your voice that awoke me to prayer.

Posted by Penal-Colony at 9:34 AM No comments:
Labels: Poem

DEATH OF THE APIARIST

The red arses went apeshit in our jam jars,
their buzzed-out bodies droned in a frenzy,
electrocuting the glass in our hands,
which we dropped in shocked terror
at the delirium we had trapped within.

You were the epitome of those summers,
as if their joie de vivre was your birth right –
you owned and pocketed the green shadows
that came and went like shape shifters
to clot the honeycombs of our days.

There are no photographs of our escapades,
those wild safaris in your cloistered fields:
the explorations, the surveys and discoveries
are more indelible now, as if encased in amber,
like the memory of a crepuscular light.

When you finally succumbed to the cancer,
I remembered you standing still in your aviary
among the rattled pigeons, whose crooning
and frantic flapping stirred up a powdered dust
that fell and then settled on you like Oshiroi.

You wanted your remains scattered at the foot
of the garden where the beehives had stood,
but the wind was dead that morning and the ash
heaped where it fell, only the inquisitive, noisy crows
seemed to mind disturbing our solemn silence.

Posted by Penal-Colony at 4:46 AM No comments:
Labels: Poem
Older Posts Home
Subscribe to: Posts (Atom)